As the global economy moves from manufacturing to a knowledge base, IP becomes central to the growth of individual countries’ wealth. One of the barriers to investment for companies in developing countries is the lack of protection of their intellectual capital.

Often there are inconsistencies in the decisions made by patent offices in different countries and this adds cost and complexity to the process for applicants. The key to consistency and quality is the harmonisation of Patent Examiners’ skills and knowledge.

Many developed countries, including Australia, routinely train people from ASEAN countries to become patent examiners. Developing the level of competency required of a patent examiner has traditionally taken between six months and two years, through a mixture of face-to-face and workplace training. Short term face-to-face programs have been expensive in terms of travel cost and trainers’ time and the outcomes have generally been average.

A patent examiner requires high-level skills in evaluation and analysis and expert knowledge of emerging new technologies. Their training as scientists and engineers typically has sharpened their technical and analytical skills but the patent examination process often requires making judgements about ambiguous issues that their technical training has not prepared them for. Traditionally, patent examination training courses involve complex legal material that includes case law, legislation and international treaties. The primary mode of content delivery is a combination of lectures and assignments.

IP Australia had a clear idea that a sophisticated eco-system approach would offer the right solution; they had some previous experience with self-paced learning in areas such as orientation and compliance training but did not have a clear vision of how to transform their face-to-face program into an ecosystem. The learning strategies for the problem required a more sophisticated approach than most self-paced eLearning courses delivered.

With the Australian Institute of Commercialisation, Sprout Labs developed a detailed blueprint for the program.

The skills development stages (A and B) were based on the instructional design approach of worked examples, plus virtual classroom, discussions and coaching. A worked example is a step-by-step demonstration of how to perform a task or solve a problem1. Reviews of multiple research studies show clearly that worked examples can be effective2. In the early activities, video-based explanations provided expert mental models to explain the steps of a solution to novice trainees. Often, blended learning programs are complex to document. The learning design map below shows part of the RPET model in a visual way. The RPET program was built around a series of instructional templates. The fully worked example below is one of the templates that was used at the start of the program. 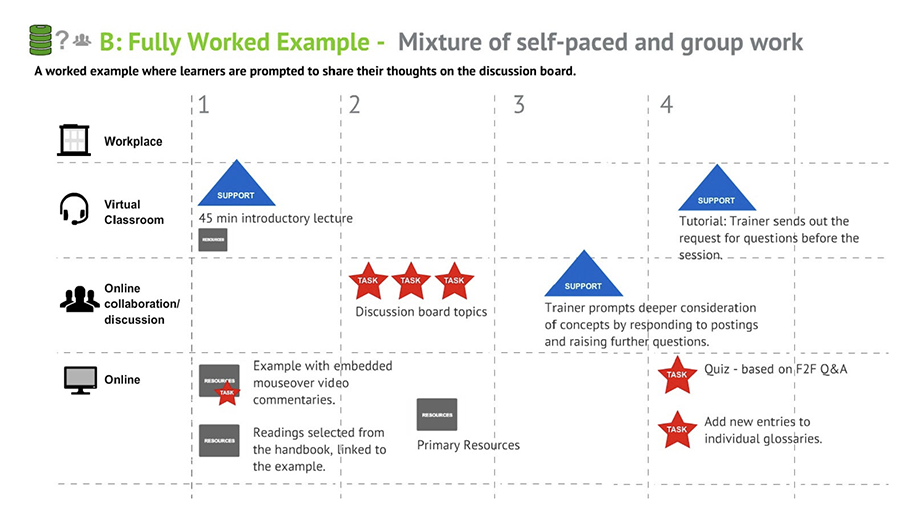 The RPET program gave trainees the chance to practise and explore, in a safe environment, the complex decision-making skills needed for patent examination. As trainees progress through the course, scaffolding is gradually reduced and the examples become progressively more open, with less commentary and guidance.

The timeframe for the build project was three months over summer to build 46 units. The program used to take 6 months of face-to-face training time.

Sprout Labs used an agile phased approach that focused on the first 14 units critical to the launch. Working in a consortium of small eLearning companies (Sprout Labs, Learning Plan and TAFE Gippsland) meant we could be responsive, flexible and scalable. We focused on active risk management and identifying root causes for issues and problems, working with the client to resolve them, for example, a lack of IP Australia staff because of holidays. This all occurred in the PRINCE2 project environment. 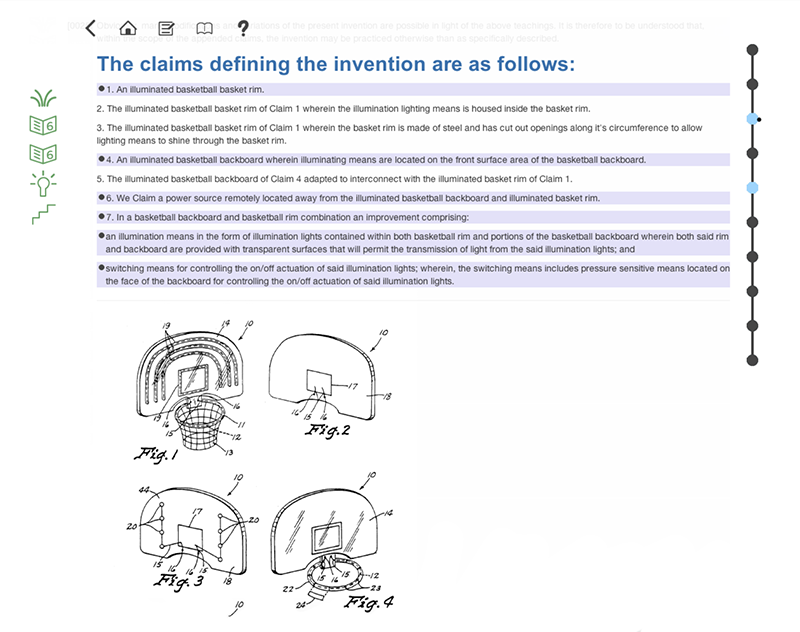 The Worked Examples provide the trainee with the chance to practice.

As trainees progressed through the course, commentary and instructional material were gradually reduced and the examples became progressively more open, with less commentary.

The handbook provides introductions to legal concepts in a format that is both cross-platform and available offline.

The use of video explanations, complete with closed captions and replay on demand, aided learners from non-English speaking backgrounds. 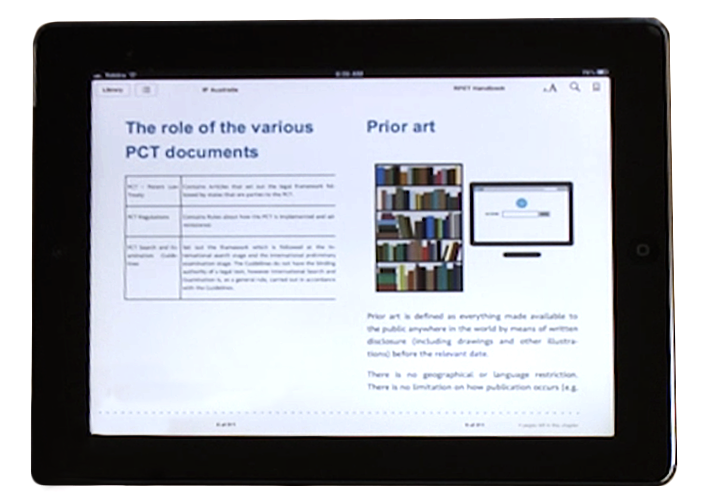 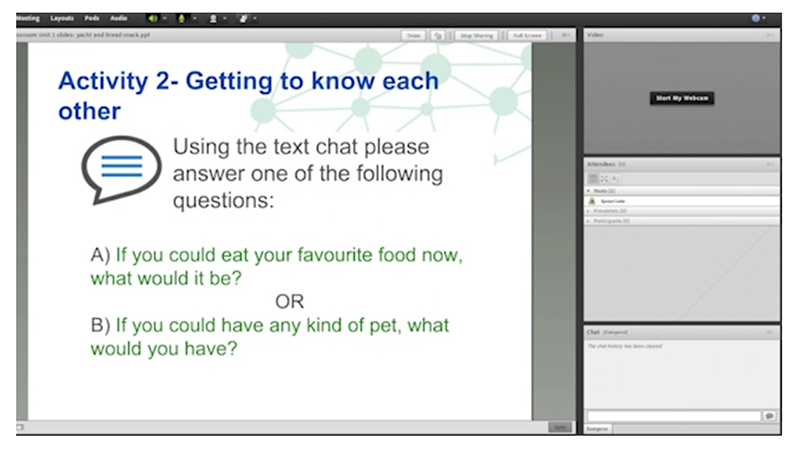 Virtual Classrooms were used for discussing more complex issues. These nurtured the community of learners, providing powerful and ongoing support for workplace change.

Yammer discussion boards were used for debatable topics requiring the trainee to reflect on challenging problems. 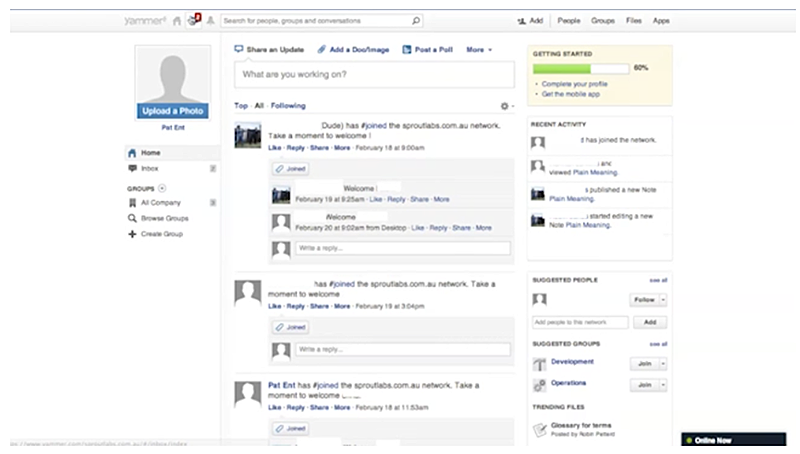 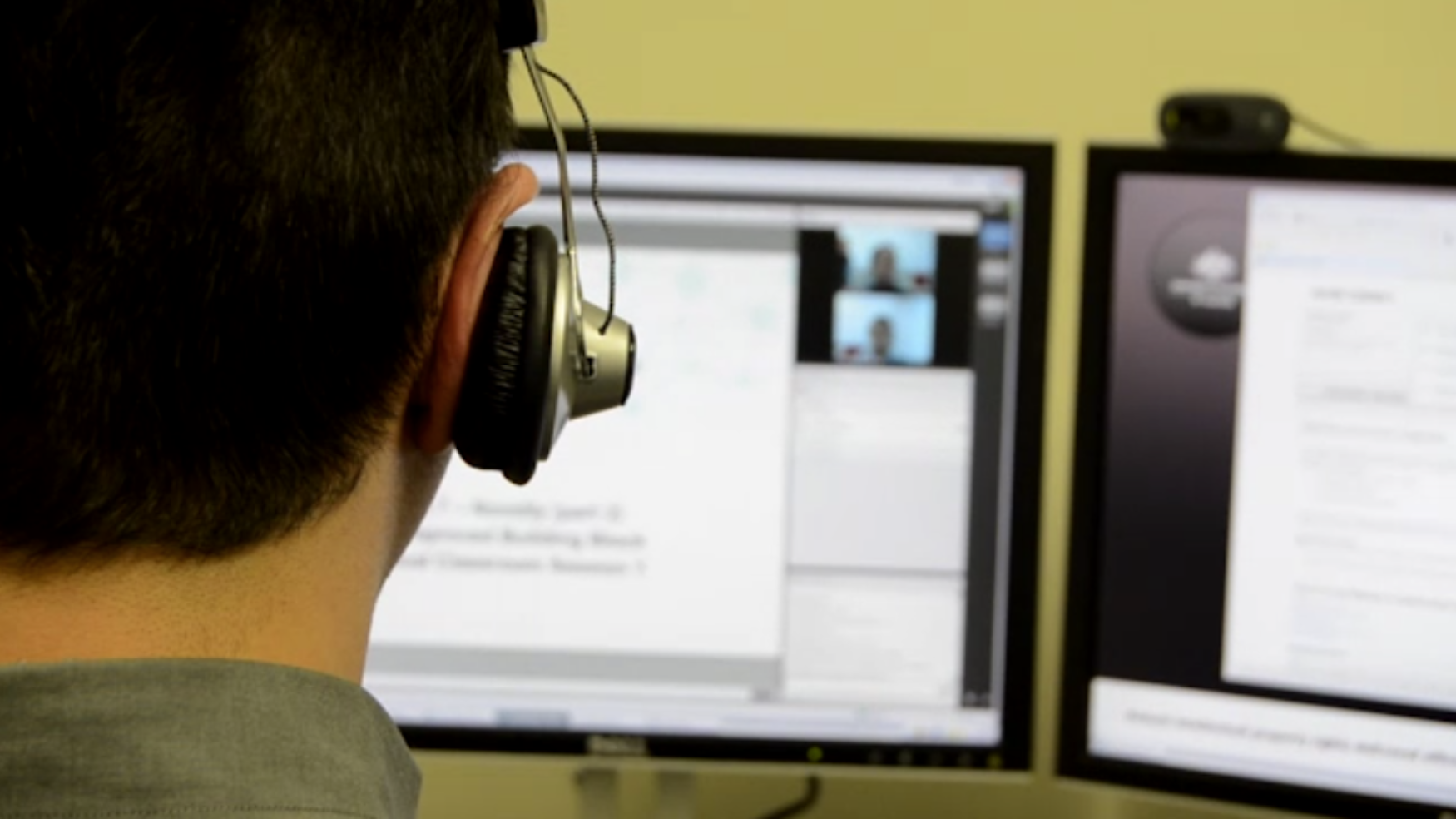 Weekly virtual mentoring provided a powerful and personalised learning experience similar to an examiner being trained at IP Australia.

The face-to-face stage of RPET was used for training in skills for team-based search and was a critical element in building the rapport necessary for a vibrant community.

The number of ecosystems to support the learning transfer included:

A trainee’s experience of one of the worked examples 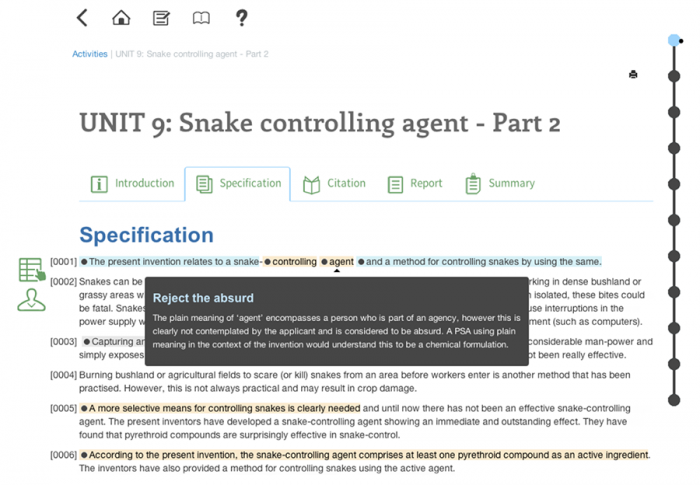 The worked examples are interactive patent documents with numerous hotspots and icons which provide access to extensive text and video-based explanations, which appear as overlays over the main document. After the first couple of worked examples, the trainees are guided to make decisions, for example, using interactive decision grids to compare multiple patents. The integration of these thinking tools into the learning process enabled them, later in the activities, to choose the correct sections for interactive reports. In some stages of the course, activities included interactive report writing, using branching scenarios to simulate the responses likely to be put forward by an attorney.

As part of the build stage, the Sprout Labs Consortium developed an assessment framework meeting Australian Skills Quality Authority (ASQA) Quality Standards. This includes assessment tools and an assessment rubric showing the trainer and trainees the skills that need to be demonstrated at the end of each stage.

Evaluation of the program

IP Australia and organisations that have funded the program need to know that their investment has been worthwhile and how to continuously improve the program.

As part of the build stage of the project, the Sprout Labs Consortium designed an evaluation plan and supported IP Australia to implement the plan and to provide advice for continuous improvement based on the plan. Kirkpatrick’s ‘four levels of learning evaluation3 system was applied to evaluate the objectives of the program. Some of the ways results are being measured are:

Stage 3 Online facilitation skills for the trainers and implementation support.

The trainers working on the RPET program are new trainers; using virtual classrooms and text-based discussion is new for them.

Before the trainers commenced delivery of the program, Gippsland TAFE customised and ran an online facilitation course for them and since the beginning of the program, they have undergone weekly mentoring sessions. The Sprout Labs Consortium provided ongoing support for the program, including monthly face-to-face workshops, troubleshooting and assisting with the evaluation of the program.

IP Australia applied the approach to their own training.

IP Australia has expanded the approach used in the RPET program to their own training of patent examiners and trade mark examiners. They now have a flexible onboarding program allowing them to recruit talent anytime, anywhere in Australia.

Embedding the program in IP offices across the region.

After the initial project, Sprout Labs worked on the IDEAL Patent Examiners project for the ASEAN Secretariat which included the development of the competency framework that can be applied across the region.

IP Australia worked with the office to customise and modify the RPET resources and mentor them during the local implementation. Now the intellectual property offices in Malaysia, the Philippines, Indonesia, Vietnam, Thailand use their own versions of the program for onboarding new examiners. Sprout Labs continues to support these offices in their use of Glasshouse. As a result of the project, the consistency and quality of Patent Examiners’ skills and knowledge across the region have increased.

The program has won a number of awards including:

It was was also a finalist in 2015 in the Australian Institute of Training & Development (AITD) eLearning design technology category.