"Want do you think the mixture of people here is?"

This was a question I heard a couple of times during the day, because I think that few people felt like they were with "their group." The audience wasn't the standard xMedia screen people. There were many people I had met recently at LearnX and at the AFTRS Serious Games and Documentaries day, and 1 Hobart face. During the day I met a number of people with a learning or e-learning background, and also a few people who work with interactive media. This meant that there were a wonderful mashing and mixing of people, and a crossover that the events seek to explore. I think this is the about third xMedia Keynote/Presentation day event that I've been to, and what I still experienced throughout the day was "it's about story" and "it's about moving away from telling." I think this might be because of the event's linkage to the Sydney Film Festival.

If you ask me, Serious Games has serious a problem.

During Morgan Jaffit's talk I really felt that "the area has a lot of potential" was one the key messages for the event. The energy and desire for games go beyond entertainment, which is what Jaffit and many others are trying to do with The Impossible Changing Brain Foundation and his move to becoming independent. That energy is part of the problem with the Serious Games; they're so BIG. Noah Faulastien talked about Ben Sawyer's Taxonomy of Serious Games, and it just seemed huge. Now I really see why there is such a strong debate about the name for the area! I actually think that within the next few years we going to have a range of names, and the area will spilt into small niches.

Although there is a lot of energy, there don't seem to be a lot of great, solid examples (maybe that comment is also because I've seen and played a lot of public examples); all of it feels a bit experimental.
The budget for a lot of these projects is small compared to AAA grade games, but the budget is big compared to e-learning budgets. The other thing is that a lot of these "Serious Games" are Flash games and a lot of the AAA grade commercial games are not Flash-based, but there is a growing market for casual games.

For me it's an interesting time for this event because I have the technology for STEM working and now I'm spending more time than I did before thinking about design processes and how to help educators and teachers design games with STEM. I'm not going to post long summaries of the talk, but there are mindmaps/notes on flickr if you are really interested. 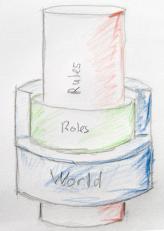 â–ª    MODEL
â–ª    ROLES
â–ª    WORLD
There is a model with rules, people take on roles that are defined by the rules in the model, and those rules and roles exist in the world.

The other talk that was a highlight was Les Sheldon's 10 Verbs. The first one was the most important for my staff, and Lee stressed the importance of writers. I often find myself writing text and dialogue, which doesn't come naturally to me, a visual thinker.

I had to leave early to catch a plane back to Hobart. One interesting comment that Brendan made at the start of the panel session was that he recently had had a conversation with someone from a Chinese university's game design program about how that person felt that new game engines are needed that do not focus on "shooting." I suppose that is what I'm trying to do with STEM by building a system based on making decisions

Where was the learning?

In one talk someone actually used the words "Learning Games," But I didn't hear a lot of talk about learning at the event. The assumption seemed to be that because the talk is not linear, it's active; so there must be learning. I don't even know if some of the social awareness games that Bogost talked about are really about learning; they are more about the awareness of issues and problems. Yes, an active experience is engaging; and a lot of evidence shows that games are learning experiences (this is why I'm excited about the area!). The reasons for this are that linkage promotes excellent games and learning is complex.

Experiencing something doesn't mean people change; how many people do you know who keep on making the same mistakes in life? Learning is more than just an active experience.

My background is in digital media and interactional design, but game design is quite different in many ways and I feel that I have much to learn. I suppose that during the day I realized that many examples such as Durfar is Dying, the people, and ideas are now a part of my daily life. I've made some the same mistakes and failures that we heard about!

Suppose the day made me realize that I am farther along the path than I thought I was, that the whole field is young, and that we all still have a lot to learn.